Should the penny be decommissioned? Why or Why not?

Posted by Chapin Spencer at 9:37 PM

As we expected, passion for the mostly zinc penny hinders the common sense move to stop its use. In 2006, due to increasing metal prices, the cost to make a penny exceeded its worth. Nonetheless, a recent Gallup poll showed that two-thirds of Americans want to keep the penny. Here are two fun links from opposing sides:

Heads or tails,
Rebecca and Chapin

I agree with the Lincoln rocks dude and the person who doesn't care if it stays or goes!! Its just another reason for the country to fight!! The penny should stay.

Its just a stupid penny! who really cares if it stays or goes! I think we should just keep the penny , SO JUST MOVE ON WITH YOUR STUPID LIFE!!!!!!

ITS JUST ANOTHER REASON THE COUNTRY FIGHTS 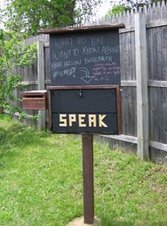